My brilliant and wonderful younger sister lives in South Africa, and she sent me a link to nice article from a local website, http://www.women24.com. The article is titled “15 ways to treat a transgender person” and it’s well-written and logical. I like it.

I’m a little shocked at how far South African culture has come, as such. This article could have been written by the best magazines in the US and I wouldn’t have noticed the difference.  At the time I left South Africa, the prevailing culture seemed to be a better fit with 1930s Germany than 2010s America.

Anyway, the “comments” section of the article includes a comment by a gentleman who wrote:

“Should we treat a person that believes they’re actually a transformer, walking about holding wheels and calling themselves “Optimus Prime”, like they’re no different from us… or should we find them the necessary help.

I can’t say I particularly care about someone that considers themselves transgender, but (like the transformer mentioned above), I’d prefer not to have to live in a society where we’re too concerned about being politically correct to point out the obvious.”

Although I dislike his condescending style, he raises a valid point — in the context of his apparently limited knowledge. The question of “Am I just imagining I’m a girl?” is certainly an early part of the cognitive journey of many, most or all t-girls – and he’s now taking that same step, albeit with an outsider’s perspective. He does, however, still have far to go.

It takes a wider perspective and much additional information to realize that, no, it’s not an imaginary thing — being a t-girl is as real as a dog being a dog, or a tree being a tree.

So, political correctness is not the best basis for respecting a t-girl’s decision to live as a girl. We can do better. We can rely on facts, and on reason — the sort of cold, hard facts and candid reasoning that this gentleman seems to value, as do I.

It seems to me that this gentleman seems to be simply be lacking information. This brings up the question of whether he’s prudent to be outspoken on a subject in which he seems to be … how do I say this nicely … fundamentally ignorant, and to do so in a forum that already takes these fundamentals for granted and proceeds beyond them, at a higher-yet level of functioning.

I’d say “no, he’s not prudent,” and for him to show his ignorance as such is a rather humbling thing to do. If he ever realizes that, then he’ll probably also realize how silly his choice of condescending tone is.

Secondary issues aside: assuming he’s a reasonable man and he’s simply missing some information, the most logical thing to do would seem to be: provide to him the missing pieces of the puzzle. Unfortunately, that’s not what happened. In the “comments” section, transgender-friendly people heaped scorn on the man, while adding very little information that’s likely to help him understand.

So, I joined the fray, and I wrote the following comment:

“I’m a t-girl. Some people are nice to me about my gender identity yet many of them basically humor me. If I put them on the spot then they probably don’t see any more of a factual basis for my claims than you do. At least you’re being candid and yours is not an unreasonable point in the absence of more information.

Absent better scientific evidence, the earth-is-flat premise isn’t all that silly. The earth certainly looks a lot more flat than it looks like a ball from the limited perspective of most people. Going beyond the obvious, by gathering facts and looking at things logically and scientifically, do we learn that the thing actually IS basically spherical, as peculiar a notion as that initially seems.

Going beyond the obvious, by gathering facts and looking at things logically and scientifically, we learn that transgender people aren’t imagining the condition: the cold, hard facts of marble-slab autopsies have show that some people have male genitals and a brain structure that’s fundamentally female. And, people who claimed to be t-girls were, in fact, later validated by such evidence. So, t-girls exist as a matter of proven, scientific fact. It’s a genetic anomaly, but it’s as real and factual as black panthers, albinos and four-leaf clovers.

Building on that, fact-based psychologically valid approaches have been developed to help an individual figure out whether he’s a male imagining he’s a girl, or a t-girl realizing she’s one such genetic anomaly.”

I hope this helps. It seems to be a better approach than simply being mean. 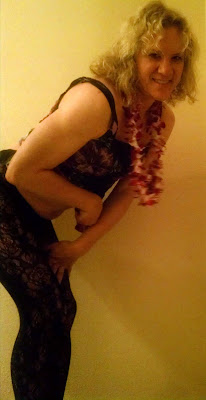 I’m in a sort-of-online debate with someone who sent me a link to an article in “The Journal of Clinical Endocrinology & Metabolism.”

The article is named “Male-to-Female Transsexuals Have Female Neuron Numbers in a Limbic Nucleus.”

I’ve read about this study, but as I recall this is the first time I’ve seen this article.

The definition of “transgender” has been problematic to nail down, not least since the underlying concepts of “gender” and “sex” are (when carefully pondered) quite complex and the superficial view tends to lead to the sort of problem that would suggest that a better definition is needed. Also, “transgender” is intended to be a sort of “umbrella” concept under which many different types of gender-related conditions are categorized and yet not conditions like “transvestite” or “cross-dresser” or “drag queen” (not that I’m implying anything negative about any of those terms).

The implied definition of “transsexual” as per Wikipedia is “Transsexual people identify as a member of the sex opposite to that assigned at birth, and desire to live and be accepted as such” and for now anyway, that definition works for me.

I’m working through the article. It’s highly scientific (which is great) but it doesn’t make for easy reading. Still, were more people to read this particular article, or even part of it, I think it’d help for there to be a lot more understanding as to the underlying issues, in fact … in hard, proven, scientific fact.

Before this study, facts were still facts, in the same sense as the nature of lightning didn’t change thanks to Benjamin Franklin’s work on the subject.

Still, the study’s conclusions of “it’s physiological” make for a different situation that had it been purely psychological.  This makes it, to my relief, even more unreasonable a position to ascribe a negative morality to the transsexual condition.

Like the work of Newton, I think that this work will trigger fundamental cultural changes — in this case, how the world deals with transsexual men and women.

As a transgender, transsexual girl I have for decades struggled with feeling like a girl while having a male-shaped  private parts. Two years ago, I decided to stop the downwards spiral of despair in my life. I decided to live as the woman I am. This decision was based on making peace with myself at a psychological level.

Later, I read about this study. These facts are highly validating, and I appreciate them as such. If my brain physiologically has a female structure, it would not surprise me, but I have no proof that it does. I didn’t go get an autopsy done; I’m not dead. Based on my own introspective psychological observations, I conclude that I’m female brain-wise and that’s good enough for me. I don’t feel the need for an MRI or a post-mortem to validate my conclusion (emphasis on “my”).

Each person gets to make his or her own lifestyle decisions. Such a decision doesn’t violate others’ rights, and as such is fundamentally 100% OK, i.e., such an individual is totally functioning within his or her own rights regardless of any combination of being openly transgender, transsexual, gay, bi, transvestite, cross-dresser, drag queen, etc. And if that person’s family and friends are unreasonable, that doesn’t change the basic principles.

Even if it is or were 100% a choice, whoever makes that choice doesn’t have to justify it to anyone whose cultural norms happen to clash with that.  There is actually always an element of choice. For example, someone who is a transsexual girl can choose to live openly as such or can choose to hide the fact. Whoever expects the latter isn’t being reasonable. It is for others to respect that person’s right to choose how to live his or her life, whether any onlookers like it or not.

If we were to argue the relative merits of lifestyle choices, it would be appropriate to point out that none of these non-mainstream lifestyle choices ended up with innocent people being lynched, or shot, or burned at the stake — nor with a battered wife, a rock-hard liver or clogged arteries.  If anything, folks who choose to be open about their non-mainstream transgender etc. lifestyle could stand on relative merit.

We don’t have to go there. Individuals get to make choices and live with the basic consequences. These should not have an extra layer of difficulty added on due to others’ harassment.

As an example, smoking has its own set of benefits and problems. In the sort of society that I advocate, the latter should not include being hassled by those who disapprove of smoking. Ditto for being openly transgender.