Sincere.compliments are the best.kind, and I got to hear some of that tonight. The above picture shows what I looked like tonight, while out and about in Las Vegas. For this picture, I stood too far away from my camera flash and so I lightened the picture, and it got grainy, sorry. Below are some more pictures, but the above one is my favorite in spite of the bad lighting.

I tend to be friendly and chatty, and even though I’m in Las Vegas every month or so, plus or minus, folks seem to remember me. The lady at CVS pharmacy was commenting on my affinity for Reese’s Peanut butter cups as soon as she saw me. The waitress at the Grand Lux Cafe asked if I still like extra milk for my coffee. The lady who cleans the tramway lobby at Treasure Island also recognized me and chatted with me in a friendly way. I love Las Vegas. 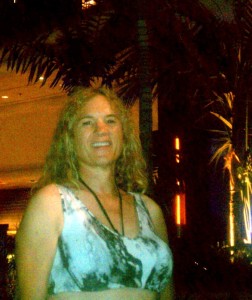 I’ve been working extra hard (or smart) and so I have a few spare dollars, and today I took a break from working and I went wandering about the Grand Canal shops at the Venetian. The Angl store is my favorite; they have elegant clothing at affordable prices. If you look good, they can make you look great. While I was standing around nearby the changing rooms, a pretty Indian lady went in to try on an evening dress. When she came out, I said “wow!” so loudly when I saw her that it must have drowned out whatever her boyfriend was thinking or saying. Oops. Sorry! But in my defense, she looked like a beauty queen in her Angl evening gown. And so in I went too, into a dressing room, to try on a midriff-baring outfit that was on sale. My boobs are fake and my hips are unimpressive, and my legs are really too muscular. So the only feature I can reasonably hope to show off is my mid-riff. And this outfit does so. Sold! And for less than $40 I now own this amazing outfit.

I went back to my room, and put on my 6″ black velvet stilettos and my new outfit, and off I went. Wow, can I walk far in these heels. I walked from my room in Treasure Island to the elevators and then all the way down to Las Vegas Blvd, across to the Venetian, up to the Grand Canal shops again, down to the Casino and the Grand Lux Cafe for dinner … a lot of walking. On the way back to Treasure Island my ankles got wobbly and it was time to change into the elegant sandals I’d brought along for that purpose. Still, in the old days just getting from the hotel room to the elevator in stilettos would have been an achievement.

Anyway, as I sat on the bench near the tram from Treasure Island to the Mirage, the lobby cleaning lady showed up, looked at me and told me I look especially nice tonight. I really appreciated that. I’d certainly gotten an above-average number of stares but it was nice to hear it verbalized. Then, still while I was sitting on the bench waiting, the tram arrived and three male passengers got out. In age range, look, dress code, mannerisms, tone of voice etc. they radiated the sort of asshole vibe that makes someone more likely to be homophobic and … sure enough: they walked past me, and one of them stared at me. Then he made a rude comment and sneer-laughed derisively and his friends looked and did the same. What a sincere compliment that was, when you analyze it. Most people ignore me or seem to like my look. A few females frown or glare as if they’re jealous. But these three guys were different. They were downright focused on me and trying to outdo each other in sounding extra disgusted about me.

The key point is, we all know, it doesn’t matter how hot my clothing or body looks, my facial structure announces I’m a t-girl, and these guys didn’t overlook that. And tonight I dressed to look hotter than I’ve ever looked in these parts. Seemed to me I succeeded.

The process is: the guy sees me and feels attracted to me. But he notices I’m a t-girl and he lives in a backward culture that hasn’t gotten the memo that t-girls are (in the beginning, anyway) “chicks with d*cks” with emphasis on the “chicks” aspect. So to his mentality, I’m a guy (as to his mentality the earth was flat and gays needed to be beat up until quite recently).

So OMG he realizes he’s attracted to someone he thinks is a guy and OMG that means he’s gay and to him that’s like burning a Bible or an American flag. He’s aghast and confused, flustered, horrified and disgusted with himself, ashamed, embarrassed. All of this happens in a split-second.

Also he realizes he’s in the presence of his fellow assholes, he’s afraid they might notice his inner state and so he tries to hide his emotional turmoil behind loud posturing to convey the opposite of what his first reaction was. His two friends hardly notice since each of them is also performing the same idiotic routine for the same reasons, each of them trying to convince himself that he’s convinced the two other idiots that, oh no, he’s not attracted to the girl (or whatever) with the flat tummy, long legs, long blonde hair, big boobs and lots of skin showing.

Since I understand the homophobic mindset, what a sincere compliment all three of them had just given me. I smiled.

Las Vegas locals are open-minded, yes, but a great many people visit Las Vegas, and that includes the worst elements of the most rednecky places in the US. So, at some point, one runs into them.

Ironically, later that night, I saw them again. This time I was walking towards them. I mention this because I look a lot better when I’m walking.

Opinions vary as to how I statically look. Some people tell me I look good; I think I look good on one out of every 12 pictures that I take. I do have facial bones like Arnold Schwarzenegger, and a body whose bones were shaped by the wrong type of hormone during puberty, so whether from the neck up or down, it’s difficult for me to look like Miss Nevada. As to looks, I’d give myself a “C” grade.

But, as to how I walk, THAT I can control, and I do. I have spent vast amounts of time practicing how to walk elegantly. As to how I move when I walk, I’d give myself an “A” grade. Maybe even “A+” when I’m on stilettos. So when I walk, yes, I do think I look hot. And this made the second encounter poetically ironic: when the three homophobic assholes saw me again, I was walking right towards them, and then right past them. There seemed to be a sort of awed silence and wow, were they staring (yes, I’ve trained my peripheral vision well).

Belatedly one or two of them tried to recapture the spirit of homophobia with a sneering guffaw but the slow timing meant it was too little, too late and it seemed clumsy, awkward and weak.

Three more sincere compliments, then. Good. I smiled to myself again, and happily kept walking.