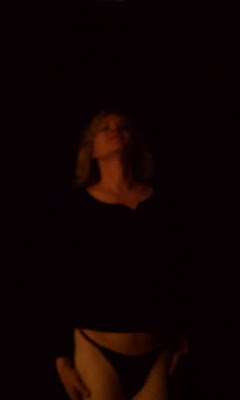 I understand how the first few steps down the transition-your-lifestyle road are intimidating.

When I first realized I’m basically a girl and needed to start living accordingly, I was so self-conscious. I bought one nice dress and one pair of high-heeled shoes and when I was in the SF Bay area where nobody I knew would be likely to see me, I’d go to remote places and practice being out and about so I could get used to the new me.

I recall thinking that a city dump would be as remote a place as any at 2 a.m. so I went there and walked around, not realizing there was a security guard on duty even then. I was mortified when he saw me.

Fast-forward to last weekend, 18 months later or so when I stayed at a nice hotel in the SF Bay area and bought myself a nice In-N-Out burger which meant walking into a restaurant room full of people who look at whoever just came in and walks up to the register and places an order.

I was wearing my tight LA Idol Jeans and my 6″ heels. I walked in there, placed my order and made chit-chat with the cashier lady. I felt good and  I looked good, with my make-up just so. The next morning, I went down to breakfast in the hotel lobby area. I didn’t have my make-up on yet, and I still looked and felt just fine. There was some or other confusion as to whether or not breakfast was included in the price of the room, and this involved me walking back and forth to the front desk in my 6″ stilettos several times and talking to several people. I was fine with that too.

I recall feeling overwhelmed one day about 15 months ago and I bought a mouse-colored wig. A wise friend asked me what I was doing and I explained that I’d planned to wear that instead of my blonde wig (my hair was short at the time; nowadays it’s long and the wig is long-retired). This way, I explained, I could blend in and not be stared at so much. My friend reminded me that I’m a 6′ tall, athletic transgender girl with showgirl legs and a curvy butt and there was no way I would ever blend in. I might as well just learn how to deal with being highly visible.

It reminds me of a scene in the movie “Hunt for Red October” where the one submarine is in dire straits and a torpedo is coming right at it, about to destroy it. It turns out the best thing for the submarine to do was to go full speed into the torpedo and destroy it before it could arm itself.

Similarly, my own approach has been to face obstacles and resistance head-on, including my own trepidations — but they nevertheless existed, to a great extent.

So, if you feel self-conscious, I hope my story helps you …