A key issue that seems to be common among many transgender girls is feeling materially deficient, aesthetically.

Puberty tends to be the worst time for us. At a time when the genetic girls around us were being beautifully transformed into curvy, pretty ladies, our own bodies became misshapen relative to how our brains are wired: female. No wonder that even in the latest version of the Diagnostic and Statistical Manual of the American Psychiatric Association, the concept of “Gender Dysphoria” is alive and well as the opposite of, well, euphoria.

My own unhappy reaction at the picture in the mirror became a downward spiral a few years ago. It was hard to be motivated to remain healthy. After I formally realized I’m transgender and I committed to live accordingly, I am a year or so later in good shape as to my body fat percentage, my blood pressure is perfect, I am in great health and so on.

I’m still flat-chested and I don’t like that. But, I do what I can with what I have. I’ve read about ab exercises that make my shape more hourglassy due to a thin middle instead of wider hips. My butt is curvy due to lots of exercising. My legs and tummy are toned and muscular. My long blonde hair has grown out nicely and my Invisalign is helping my teeth be more straight. 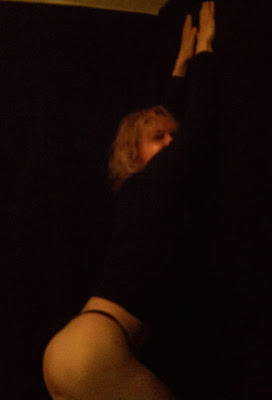 I have gradually evolved to look good enough to where I’m in quite high demand as a part-time stripper and model, even though I am flat-chested. I made $400 this weekend in two and a half hours, modeling in (initially, anyway) a sexy dress, black thong, black bra and 6″ black stilettos.

I didn’t have to undergo massive facial surgery or get butt implants or breast implants in order to look good enough to do this. I still look forward to all three of these procedures so that I can feel better yet about my looks, but it feels good to know that I do not have to look like Marilyn or Barbie so as to be able to earn money with my looks.

Money tends to be an objective measure of value, so this definitely helps with my self-confidence, too.

In case someone wants to point out, politely or otherwise, that sometimes a paradox is interesting in its own right (e.g., someone who looks to some extent like a girl but has male-shaped body parts ‘down there’) — I agree. But, that wasn’t the theme of these last two sessions nor do I plan to entertain clients whose main agenda is morbid curiosity nor have I ever been approached as such. 🙂